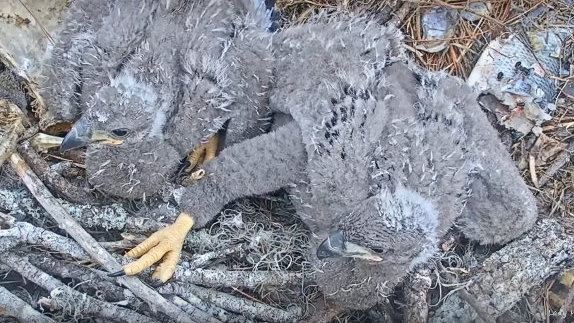 Harriet and her partner M15 wanted kids! Harriet and M15 are eagles that nest in Fort Meyers, Florida. Eagles in Florida usually lay their eggs so they’ll hatch around the first of the year. And Harriet did. Of the two eggs laid, though, only one hatched (on December 23, 2019). The other didn’t. So Harriet and M15 worked around the clock feeding the chick and caring for it. Right up until January 15, 2020, when the eaglet, M14, died from what appeared to be a sudden loss of blood.

Harriet laid two more eggs, and she and M15 looked after them and kept them warm until they hatched. The first one to hatch was E15, on March 31 in the early morning, and that was followed by E16, who hatched three and a half days later! (The E’s are for eaglet, and since Harriet was followed, these are the 15th and 16th eaglets she’s had.) 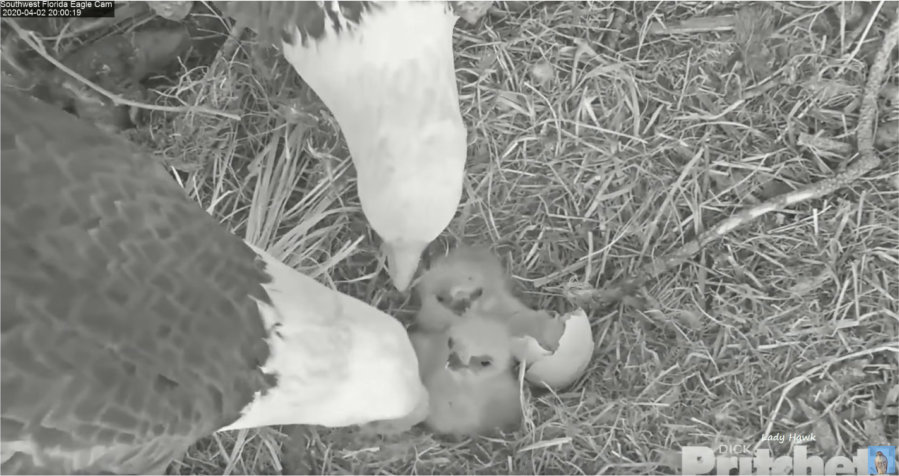 In the above photo, E16 isn’t entirely free from his shell. (Her shell? We really can’t tell because the eaglets are so small.) And here Harriet and M15 are gently feeding both eaglets with small bites of meat. E16 was born just before 7 PM, and one of the cameras shoots infrared images at night, hence the black & white photo. (Dick Pritchett is a realty office in southwest Florida that’s donated the four cameras.)

The above picture and the two following were shot this evening. You can’t see what the furry thing in the southwest corner of the above photo is…so I waited until the camera panned out a bit. 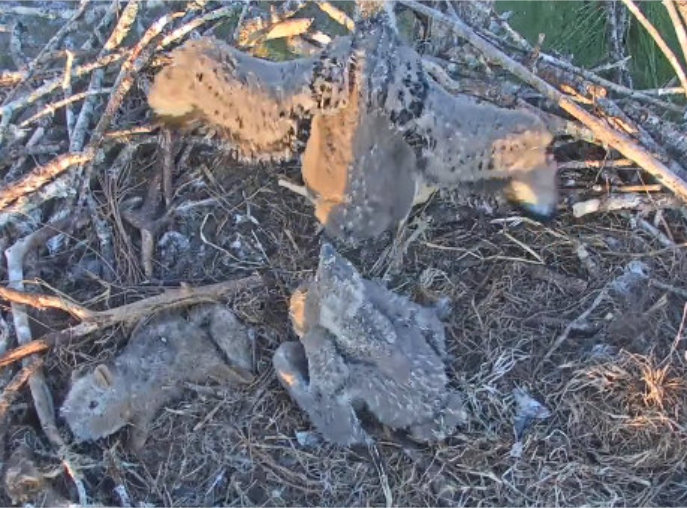 When they were only two weeks old, Harriet brought a squirrel for them…but it wasn’t a real squirrel. Somehow she found a children’s toy squirrel. And she wasn’t impressed by the fake fur, which wouldn’t pull out, or the absence of meat…all she got were beak’s full of fluff! It’s become their favorite pillow!

All the best to this foursome! E15 is already over a foot tall with a three-foot wing span, and E16 is close behind. The eaglets are late comers, but with the care and attention their parents are showing them, they should do fine. But nature’s tough and anything could happen. We’ll follow their progress, and let you know how they are! 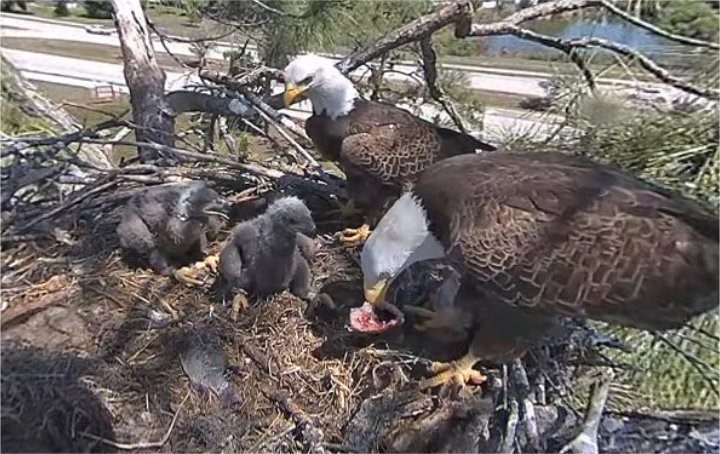 Southwest Florida Eagle Cam—This site has four cameras you can view from, and a monitored chat session to support visitor questions. Enjoy!

FiveWeeks—YouTube has a video that shows the eaglets, and E15 celebrates his five-week birthday! Note the pronounced feathers on the back of his wings, and E16’s to a lesser extent. (The toy squirrel is still present!)